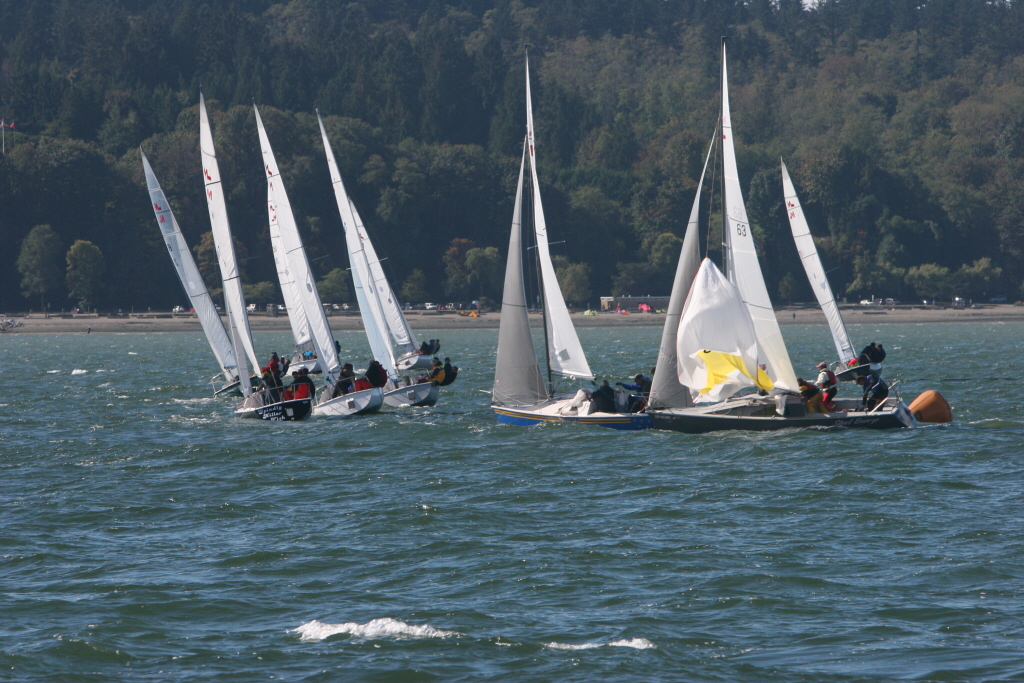 We got a decent 7 boats, racing 3-handed, for what looks like the first and last "official" RVYC race of 2020.
The turnout was especially good given things weren't looking that great when the rain was pouring down at 9pm the night before, and the forecast not showing much promise.

In the end, we were treated to a truly excellent day of sailing, a gusty 15 knots or so with some periods maybe pushing 20, and the sun even came out for a cameo appearance. We finished 3 races and were just about to start the final leg of Race 4 when the windward mark drifted into a freighter's anchor, resulting in an unfortunate but necessary abandonment by the RC. I was pretty wiped out after (almost) 4 races so was relieved when the fleet voted with their feet and headed home instead of waiting out the 30 minutes or so for a course reset to re-sail the last race.

Me and the two Paul's - Martin and Watson (not at all confusing) - racing on #13, Back in Black - managed to pull off three bullets in the breeze. Mike on 304, Too Wicked, was helpfully late for the first start ('adjusting the shrouds, and trouble with battens' was the excuse, but we know the truth...15 knots in October can seem a bit scary even for the veterans after a lazy summer of 10 knot days). 304 still managed to crawl back to second in that race. With a sizable lead in race 4, the last minute abandonment was probably especially frustrating for the team on 304.

Alex "The Machine" Levkovskiy and rockstar North Sails crew, racing on 233 borrowed from his dad Yury, way exceeded expectations with a solid 3rd place result in his first regatta helming a Martin, including an inspired port tack of the fleet in his first start ever. These boats have a learning curve, so nice one!

Debrief notes: I think our boatspeed was a bit better than most boats this weekend, we were often able to grind down boats around us after the start, and as soon as we got a clear lane were able to launch out to a decent lead. I think we were likely one of the heaviest crews which is a pretty significant factor in breeze - I understand this even more now after racing some of the windier races this summer very light with just two crew. That said, we're often one of the lightest crews on BiB and can still make it work in breeze.

Keys are:
1) depower! We had max outhaul, max cunningham, max jib luff tension, jib cars aft a bit, and lots of mainsheet on, with the traveller down all the way in the windier moments. As soon as you can't keep the boat flat in the puffs, sails should be flat.
2) hike. I won't say we were all hiking hard the whole time this weekend, but if you can get your crew weight way out the whole upwind leg, it helps!
3) steer. Once the traveller is down all the way, the only way to keep the boat flat without dumping the main is to pinch. Heel too much and you're going sideways fast. Dumping the main sometimes works but it's hard to get it right without slowing down too much I find, really only for the emergency huge puff. But if you constantly pinch the boat will slow way down, so the trick is to pick the spots where you can bear off and get the boat rumbling without heeling too much, get the keel lifting, so you can pinch to depower and gain a bunch of height in the next puff. The groove!

Great season, see you all at the fleet dinner? Probably not. (sigh)