Rules on the Port Layline

Racing Concept of the Month #3

The “racing concept of the month” articles are way of sharing the general racing knowledge that has been developed over the decades in the Martin 242 fleet – this is the third of a series. All are loosely based on the excellent content in this article by Michael Clements.

Rules on the Port Layline

As we covered in this article, the English Bay westerly breeze normally means it pays big to bang the left corner upwind. This has the unfortunate side effect that we often find ourselves approaching the weather mark on or near the port layline. If not handled properly, this can have disastrous consequences!

This article will be a quick review of the rules that apply when rounding a mark, with a specific focus on what you should be thinking about on the port layline.

18 MARK-ROOM
18.1 When Rule 18 Applies
Rule 18 applies between boats when they are required to leave a mark on the same side and at least one of them is in the zone.
However, it does not apply
(a) between boats on opposite tacks on a beat to windward,
(b) between boats on opposite tacks when the proper course at the mark for one but not both of them is to tack,
(c) between a boat approaching a mark and one leaving it, or
(d) if the mark is a continuing obstruction, in which case rule 19 applies.
Rule 18 no longer applies between boats when mark-room has been given.
18.2 Giving Mark-Room
(a) When boats are overlapped the outside boat shall give the inside boat mark-room, unless rule 18.2(b) applies.
(b) If boats are overlapped when the first of them reaches the zone, the outside boat at that moment shall hereafter give the inside boat mark-room. If a boat is clear ahead when she reaches the zone, the boat clear astern at that moment shall thereafter give her mark-room.
(c) When a boat is required to give mark-room by rule 18.2(b),
(1) she shall continue to do so even if later an overlap is broken or a new overlap begins;
(2) if she becomes overlapped inside the boat entitled to mark-room, she shall also give that boat room to sail her proper course while they remain overlapped.
(d) Rules 18.2(b) and (c) cease to apply if the boat entitled to mark-room passes head to wind or leaves the zone.
(e) If there is reasonable doubt that a boat obtained or broke an overlap in time, it shall be presumed that she did not.
(f) If a boat obtained an inside overlap from clear astern or by tacking to windward of the other boat and, from the time the overlap began, the outside boat has been unable to give markroom, she is not required to give it.
18.3 Passing Head to Wind in the Zone
If a boat in the zone of a mark to be left to port passes head to wind from port to starboard tack and is then fetching the mark, she shall not cause a boat that has been on starboard tack since entering the zone to sail above close-hauled to avoid contact and she shall give mark-room if that boat becomes overlapped inside her. When this rule applies between boats, rule 18.2 does not apply between them.
18.4 Gybing
When an inside overlapped right-of-way boat must gybe at a mark to sail her proper course, until she gybes she shall sail no farther from the mark than needed to sail that course. Rule 18.4 does not apply at a gate mark.

In plain English: the boat inside at a mark must be given room to round the mark from an outside boat, with a bunch of exceptions, some of which we’ll dig into below.

One important exception that most everyone knows is at the weather mark the Mark Room rule does not apply if the boats are on opposite tacks (Rule 18.1-a). In this case, you can just consider it a normal port/starboard situation – port needs to keep clear of starboard even if she is the inside boat at the weather mark. See Diagram 1 below, in position 1 the port tack boat (Red) does not have room. 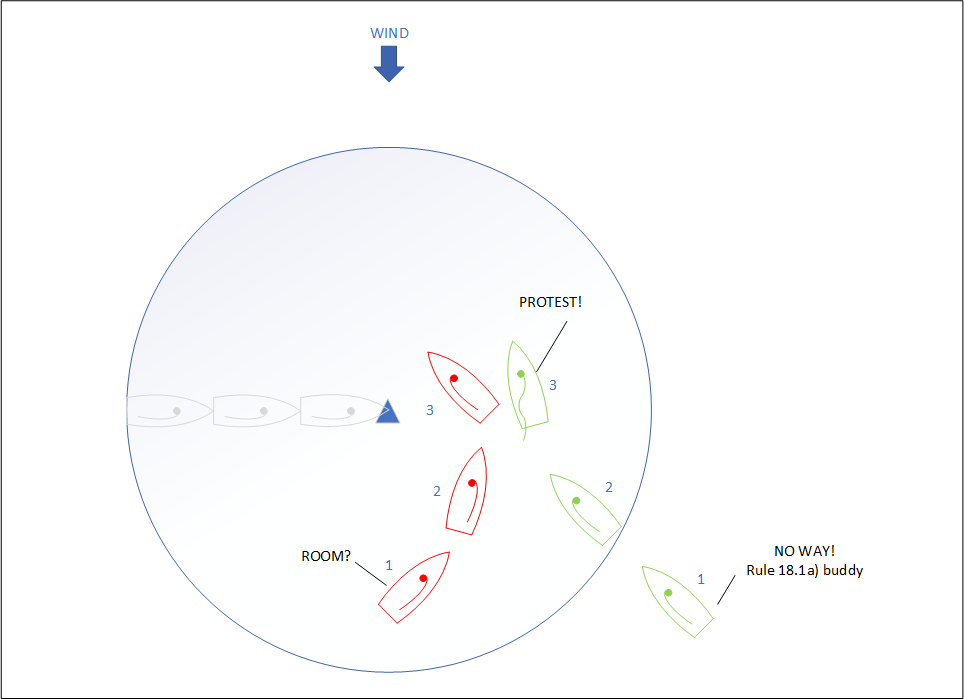 But it gets worse for our poor port-tack approach boat. Not only does she not have room, but if she tacks inside the zone in an attempt to round the mark, and causes a starboard tack boat to sail above close hauled to avoid contact, she then breaks rule 18.3 (Passing Head to Wind in the Zone). The easy way to tell if a boat is above close hauled is if her sails luff. In position 3 in Diagram 1, port (Red) has fouled starboard (Green) if Green’s jib luffs at all. This is true even if Red didn’t tack too close (break Rule 13 - While Tacking) or change course too quickly (break Rule 16 - Changing Course); even if Green was given all the room to keep clear she needed by Red – it’s a foul if Green needs to sail above close hauled.

Note that if Green does not sail above close hauled, it’s not a foul (as long as Red gives Green sufficient room to keep clear while tacking or changing course). This is most often the case if the starboard tacker has sailed well above the layline and is reaching down to the mark, see Diagram 2: 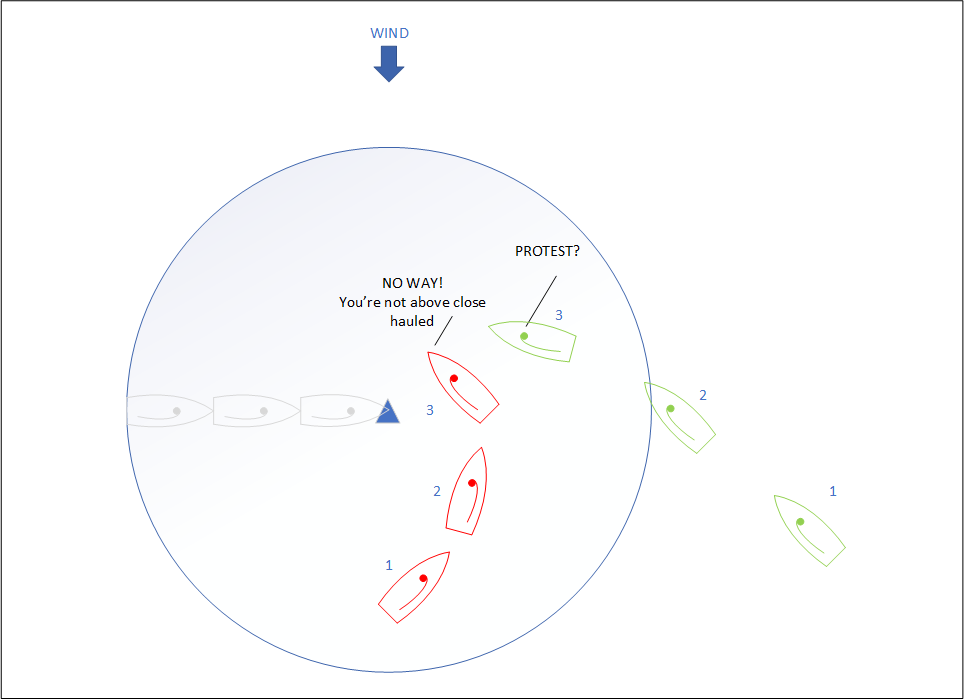 In practice, for a port tack approach boat it’s extremely difficult and risky to tack inside any starboard boats at the layline without fouling, even if the starboard boat is reaching in. Protest committees (if it gets to that) will often give benefit of the doubt to the starboard tack boat. Usually best to avoid this situation all together and if in doubt – duck behind.

One slightly risky move for a port tack boat at risk of fouling a starboard tack boat on the layline in the zone is the “Fly By”. This move can save the port tack approach boat some distance compared to ducking – but your judgement needs to be good! The idea is, if you are on the port layline and slightly ahead of a starboard tack boat on the opposite layline, you can sometimes safely cross ahead of the starboard tacker, rather than tacking inside and risk a foul or ducking. This move works if you’re far enough ahead to cross, but not so far that you could safely just tack on the layline well ahead of the starboard boat. Diagram 3 shows this – Red just squeaks ahead of Green before tacking, so:
The judgement part is you need to be very sure you’re going to cross safely. Green still gets ahead at the mark, but you saved yourself a BIG duck and probably gave up less distance to the rest of the pack – especially if there’s a long line of starboard tack boats approaching meaning you’d be ducking 3 or 4 boats. 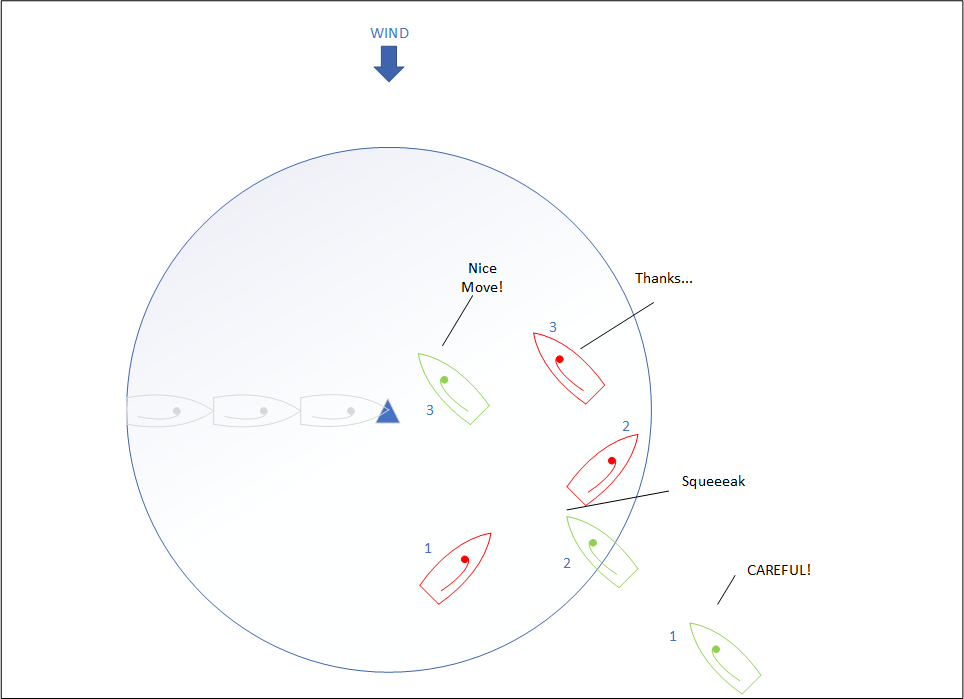 Another interesting situation that often comes up in English Bay is there will be two boats both on port approaching the weather mark. In this case if the boats are overlapped Rule 18 does apply. The inside boat gets room to round the mark: 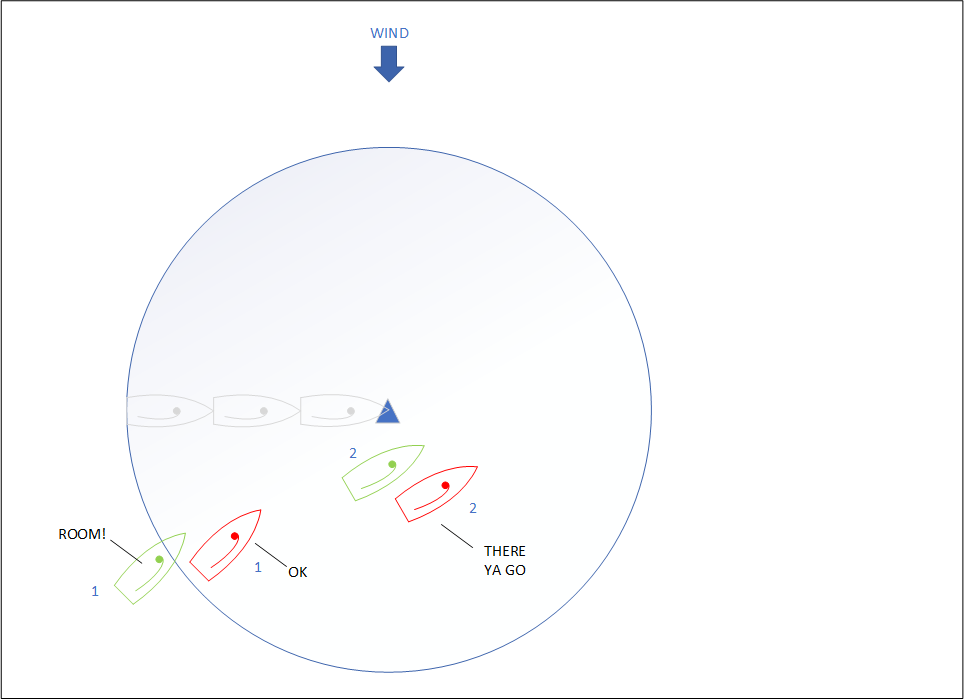 Even if there is no overlap, the outside leading boat still needs to be careful. While they don’t need to give a boat clear behind room to round a mark, the other rules of Part A still apply! That means if tacking, she needs to keep clear – you still can’t tack too close! See Diagram 5 – even though Green doesn’t get room, Green also doesn’t need to “anticipate” Red’s tack and alter course to sail behind before Red completes her tack (except to avoid contact). 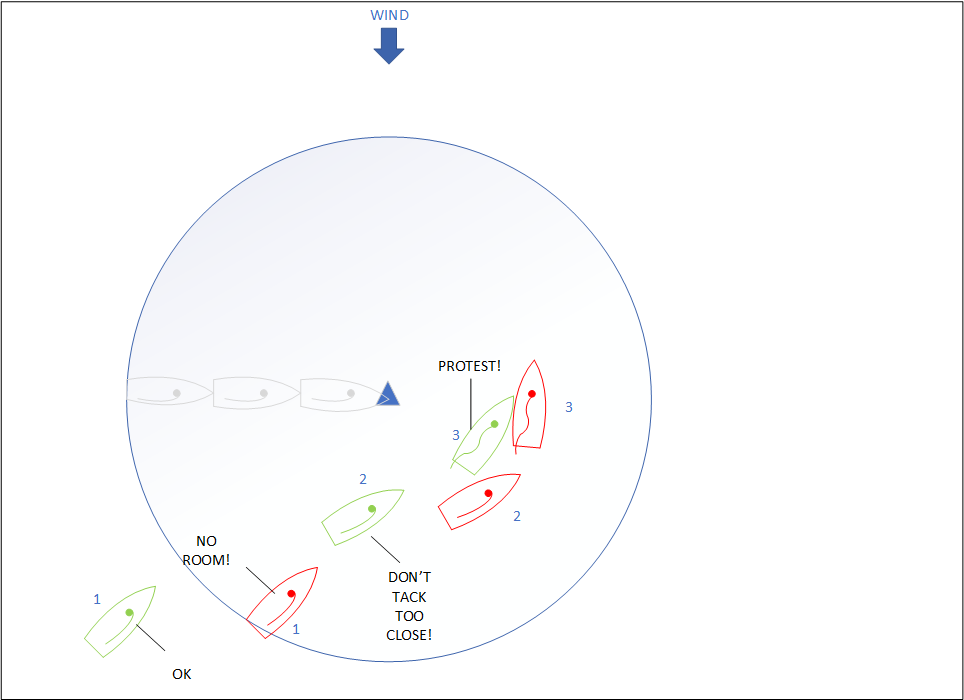 Also…there is no rule that says the windward boat in this scenario above must tack right away once at the mark. The leeward boat can luff (slowly – but not start a tack), but it’s ultimately the windward boat that decides when to tack around the mark – Green can drive Red well past the layline if she wishes without breaking any rule (Diagram 6). 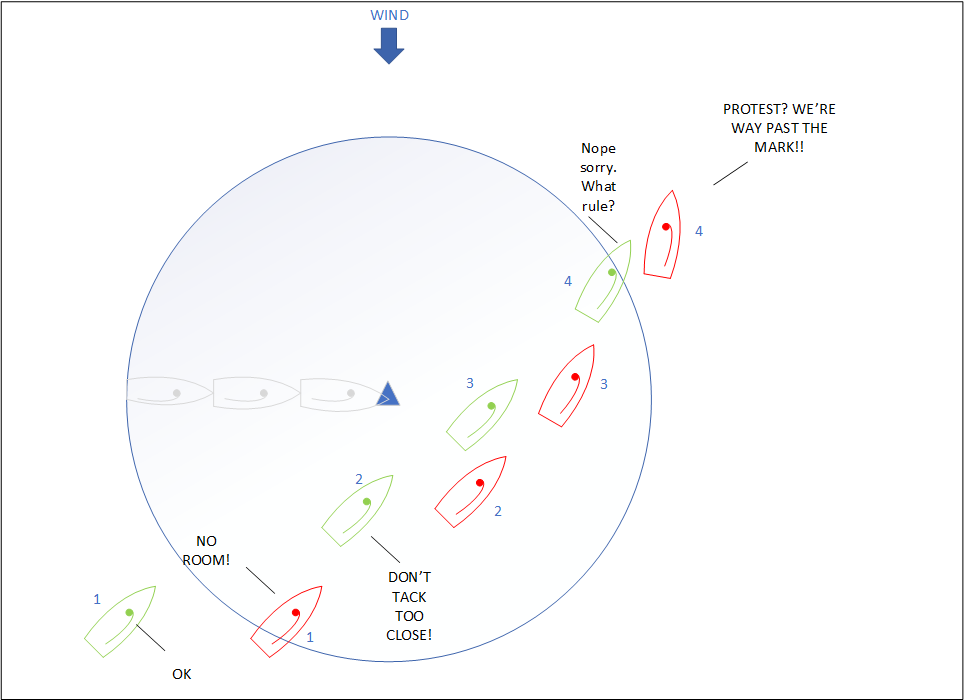 A boat on the port tack layline also must be cautious of any boats that have already rounded the weather mark and have started on their way downwind (this applies equally if there is an offset mark). Rule 18 no longer applies since the lead boat has already rounded the mark – Rule 18.1 c) says mark room does not apply between a boat leaving a mark and another approaching it. So in this case, the other basic right-of-way rules in Section A and B apply.

In a normal situation the boat ahead rounding the mark will be on starboard tack, and a boat approaching will be on port tack, so the normal port/starboard Rule 10 applies, and port must keep clear. Practically, this is usually easiest to accomplish for Red by luffing and going behind. (Diagram 7) 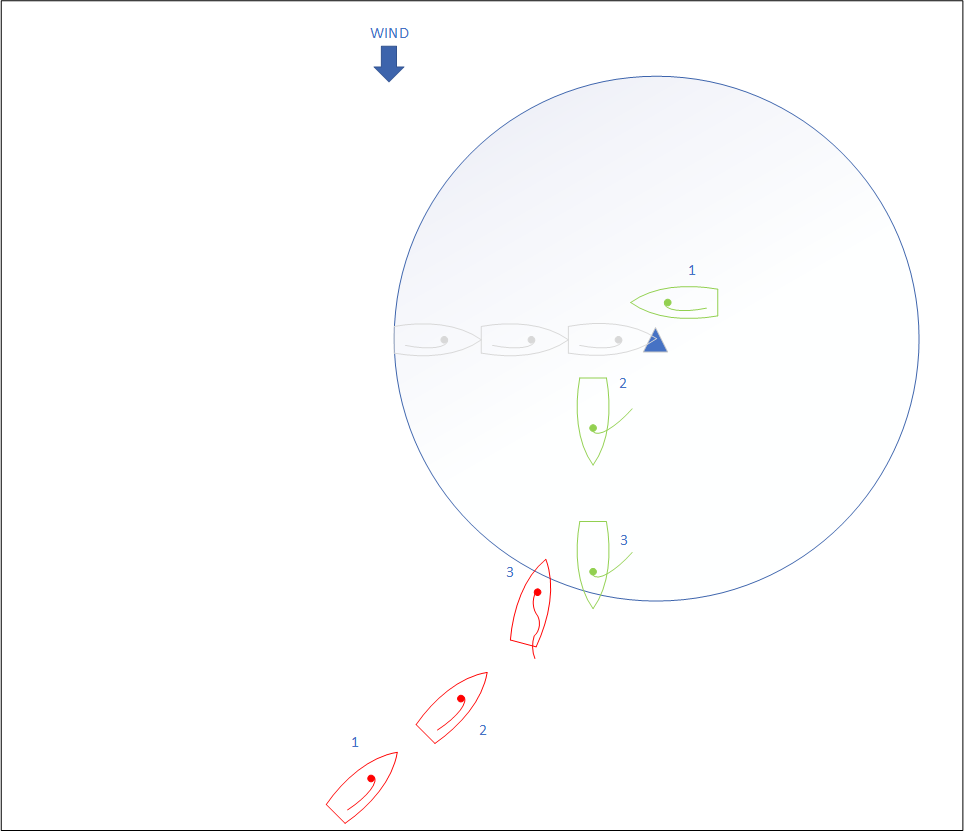 However, Green needs to be careful here! Under Rule 16 (Changing Course) a right of way boat is limited – Green needs to give Red room to keep clear any time she is changing her course.

Diagram 8 shows how this usually plays out at a weather mark rounding – if Green is still in the middle of her turn down to her downwind course, she needs to give Red room to keep clear. In practice, this often happens if Red is at or near the port layline, as it’s unlikely that Green can turn downwind and stop changing course in time for Red to be able to keep clear. It’s usually best for Green to just play it safe and sail behind any port tackers, even if she thinks she’ll be able to finish her turn in time. This normally won't cost Green much extra time or distance, but fouling Red is costly. 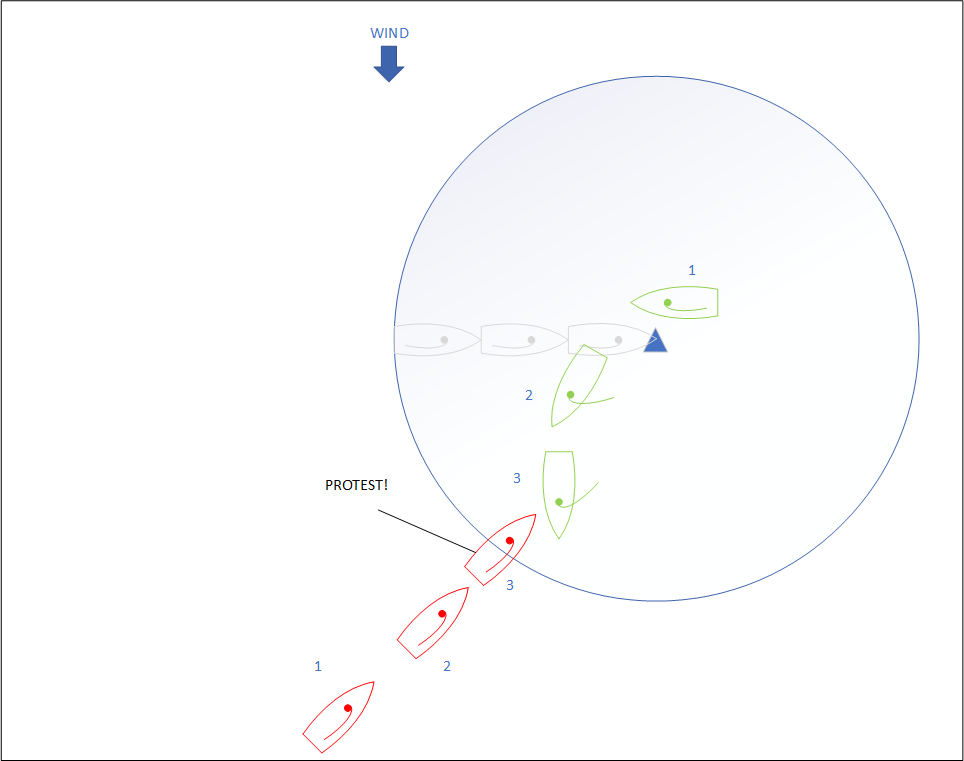 The final way this scenario can play out is if Green decides to gybe at or shortly after the weather mark rounding (Diagram 9). Even if she completes her gybe and is no longer changing course, any boats at or near the port layline are now leeward boats, and Green will have to keep clear because of Rule 11 (On The Same Tack, Overlapped aka Windward/Leeward). In the Martin 242 this can be especially tricky, because Green’s helm is often in the middle of looking up at the windex /yelling to get the jib furled/keeping the kite from collapsing/looking back upwind at competitors behind, and will completely forget to look downwind under the main to see if any boats are heading upwind at them – I’ve been guilty of this more than once! Don’t forget to look for port tack leeward boats before starting that gybe. 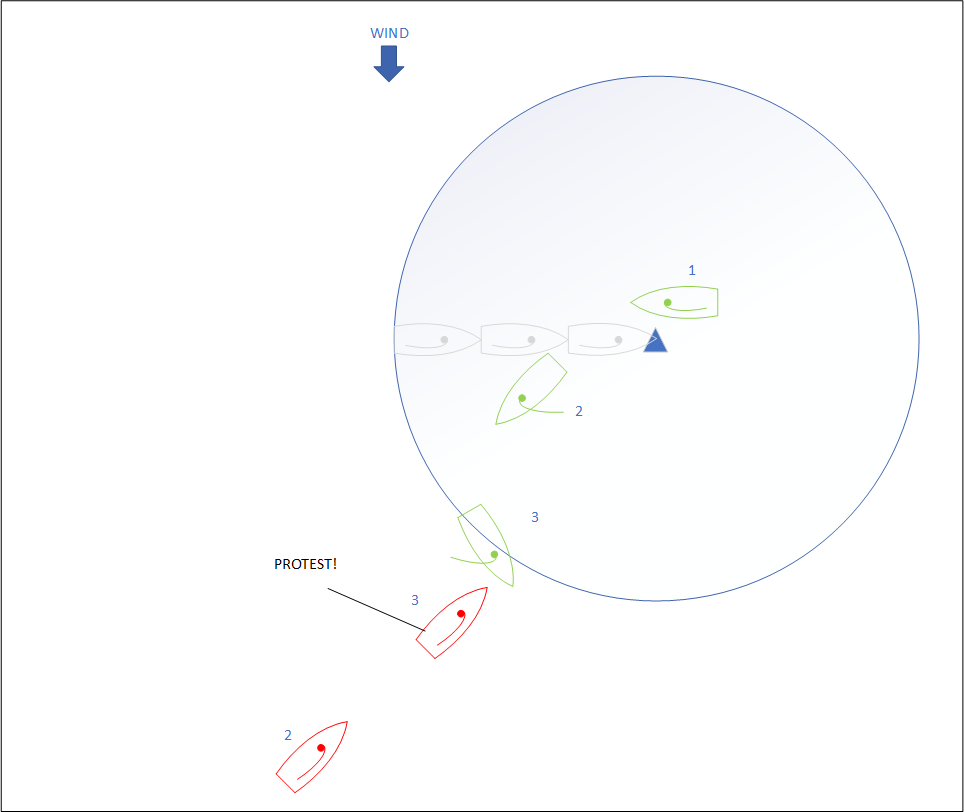 Good luck on that port tack layline!
- written by Reto